Why is Creation so Important to Creationists?

Posted on June 17, 2013 by jesuswithoutbaggage

Why is the battle of creationists against evolutionists so intense? One might think it easy enough to accept that the Genesis creation accounts were written by an ancient, pre-scientific society as a poetical expression or as a reflection on the question: Why are things as they are?

But creationists take the historical integrity of the creation accounts quite seriously and defend them with enormous energy and tenacity. What explains such determination? 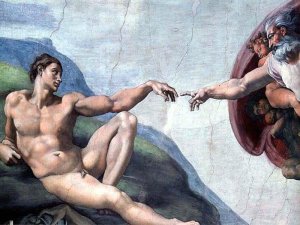 Inerrancy of the Bible

Inerrancy is a key concept in evangelicalism. This is not just the idea that the Bible is authoritative but that it is historically and scientifically accurate in every detail; any archaic, symbolic, or metaphorical understanding is unacceptable.

Genesis describes the creation of the earth and humanity in some detail, and the first man was created directly by God from the dirt. The most vocal creationists insist that the entire universe was created in six literal 24-hour days, as stated in Genesis.

The Uniqueness of Man and the Image of God

If the creation passages are not historical accounts, where does this leave humanity? We think of ourselves as unique—different from all the animals, but if we evolved from lower animals, then how are we different from them? This is disturbing to many Christians.

Then God said, “Let us make mankind in our image, in our likeness, so that they may rule over the fish in the sea and the birds in the sky, over the livestock and all the wild animals, and over all the creatures that move along the ground.”

Genesis says we were specially created in God’s image so that we can rule over the animals. How can this be if we are nothing more than animals ourselves? How can we claim to be made in God’s image if there was no Adam?

These are both important issues to creationists, but I think the primary issue, eclipsing all others, is how the authority of Apostle Paul and the doctrine of original sin are affected if the Genesis accounts are not historical.

Paul seems to think that Adam was historical and that his disobedience caused the sinful ‘fall’ of humanity.  The doctrine of original sin is based on this passage, and it is of extreme importance to the entire doctrinal structure of many evangelicals.

If Adam was not a historical person, it calls into question Paul’s authority in this and everything else he says. It also destroys the basis for the doctrine of original sin and all the theology built around it.

This is no small thing. In fact, it was this very issue that brought on my spiritual crisis and my grieving the loss of God for more than a year.

What are the Consequences of Evolution for Christians?

The overwhelming evidence for evolution means that we need to realize that the Genesis accounts are not historical and reconsider what it means to be in God’s image and whether our doctrine of original sin is valid. However, it does not mean that our faith in Jesus is in jeopardy; I and many other Christians who have struggled with this issue can attest to that!

Next time we will consider whether an evolutionary Adam provides a middle way between creationism and evolution.

21 Responses to Why is Creation so Important to Creationists?