Posted on April 22, 2019 by jesuswithoutbaggage

What is most distinctive about what flat-earthers believe is what the don’t believe. Flat-earthers do not believe the earth is a sphere (globe) but, rather, is flat. Some think the earth is flat and square following Revelation 7:

But most think the earth is flat and round as described in Isaiah 40:

Do you not know? Have you not heard? Has it not been told you from the beginning? Have you not understood since the earth was founded? He sits enthroned above the circle of the earth, and its people are like grasshoppers. He stretches out the heavens like a canopy, and spreads them out like a tent to live in.

My Long Acquaintance with Flat-Earthers

As a child, a lady in my fundamentalist church was a flat-earther, and I became a flat-earther, myself, because of her. I previously wrote about my defense of flat earth in the fifth grade. But even though I was not a flat-earther for long I kept up with them from time to time. As a reader of American religious groups, I was interested in Wilbur Voliva, the leader of the church and city of Zion, Illinois, because he was a flat-earther.

Later, I came into contact with Charles Johnson and the Flat Earth Society. Johnson had become custodian of most of the flat-earth archives up to that point, which he kept in a trailer. He worked hard to spread flat earth views and even had an on-line presence. Non-flat-earthers were not allowed to contribute to the online conversation, but I was a member anyway—I just didn’t say anything. I was there to listen.

I think he was also the one who made a big deal out of a story of a ship traveling across what we would call the far southern seas and took longer than expected. He was elated; it fit his theory perfectly. I thought it odd, though, because this was just one ship and I am sure many ships traveled that same area.

One thing I remember from that time was that there was a contingent of Australian flat-earthers on the site, and they would confirm that they, who lived ‘down under’, were not hanging from the earth by their feet.

Unfortunately, Johnson’s trailer caught fire and the records were destroyed. Sometime after that, my computer crashed and I lost all my accumulated flat earth material. Johnson died in 2001.

Flat-Earthers, Inerrantists, and the Vault of the Sky 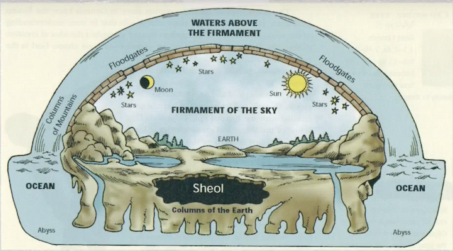 I began this article with references to two biblical passages that suggest to flat-earthers that the earth is flat. But these are not the only passages that make such a suggestion. In fact, a flat earth is in view from the very beginning of the Bible and was the view of the ancient Hebrews who had little idea of a spherical earth. Genesis 1 reports:

And God said, “Let there be a vault between the waters to separate water from water.” So God made the vault and separated the water under the vault from the water above it…

The vault separates the rain from the surface water on the earth; but notice what is in the vault of the sky—the sun, the moon, and the stars. They are right there above us—not that far away.

Genesis 7 gives us an idea of about how much combined water there is in the water on the earth and the water in the vault:

[O]n that day all the springs of the great deep burst forth, and the floodgates of the heavens were opened. And rain fell on the earth forty days and forty nights…The waters rose and increased greatly on the earth, and the ark floated on the surface of the water. They rose greatly on the earth, and all the high mountains under the entire heavens were covered. The waters rose and covered the mountains to a depth of more than fifteen cubits [about 23 feet]

I assume that most (or all) flat-earthers are inerrantists, but certainly not all inerrantists are flat-earthers. And it makes me wonder why. These passages from Genesis are thought to be inerrant, and yet most inerrantists do not embrace the flat earth descriptions that lie behind them.

How Do Flat-Earthers Envision the Earth?

I have often heard of those who asked flat-earthers, ‘Then on what does the earth rest?’ And the answer is, ‘The back of a giant turtle.’

‘And what is that turtle on?’ Answer: ‘Another turtle; it is turtles all the way down.’

I have never heard a real flat-earther say anything like that. But flat-earthers do not simply reject views of a spherical earth but have specific beliefs about how a flat earth looks and works. We will talk about that next time.

Articles in this series:
I Was a Fifth-Grade Flat-Earther
Why the ‘Vault of the Sky’ is so Important to Flat-Earthers