I Was a Fifth-Grade Flat-Earther

Posted on April 15, 2019 by jesuswithoutbaggage

As a child, I was a convinced flat-earther because of a lady in our fundamentalist church, and she believed it because of the Bible.

How can you be more clear than that? The earth has four corners, and four corners form a square. So the earth is flat—and square. Pure logic! 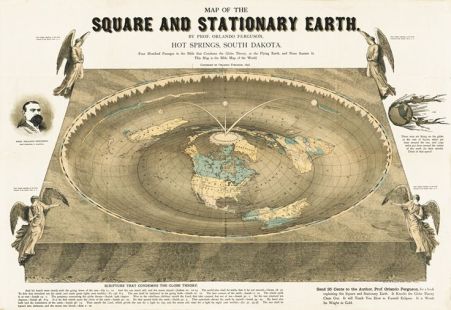 At that time, American school classes began the day with a Bible reading. My teacher had designated me his Bible student since I carried my Bible around with me and read it whenever I finished a test early or had other free time. So he asked me to read the passage that day; I chose Revelation 7 and began to read at the the front of the class.

And I saw another angel ascending from the east, having the seal of the living God: and he cried with a loud voice to the four angels, to whom it was given to hurt the earth and the sea, Saying, Hurt not the earth, neither the sea, nor the trees, till we have sealed the servants of our God in their foreheads.

And I heard the number of them which were sealed: and there were sealed an hundred and forty and four thousand of all the tribes of the children of Israel.

Actually, I did not complete the entire passage. I had not planned ahead and got bogged down in the tribes, so the teacher asked me to read down to ‘here’, which I was glad to do. I could not even pronounce some of those names.

Billy Trips Me Up

My purpose was to prove the earth was flat. Afterward, my classmate, Billy, asked me about the reading, and I repeated that the earth is flat and pointed to the four corners of the earth. He said, ‘Yeah, but that could be the four directions—North, South, East, and West.’

I was dumbfounded; I had never considered that before. Confidence in my biblical interpretation was broken by a fifth grader. I don’t recall whether I stopped being a flat-earther that very moment or whether I persisted a little while. But I certainly was not a flat-earther much longer.

Inerrancy and ‘Plain Reading’ of the Bible

But Billy was right; it is not as simple as that. Four corners here does not actually mean four physical corners. Just as we should not understand that angels were actually holding back four winds.

But beyond that, the four corners are only incidental to the passage, which is not about corners but the sealing of the tribes of Israel. And the passage does not appear in some historical description, or even a future historical description, but in an apocalyptic work based on wild drama and heavy symbolism. This is not the place to discover facts about how the earth is shaped—it doesn’t address that at all.

And yet a lady in my church read, ‘I saw four angels standing on the four corners of the earth’ and came to a firm conclusion that the earth is flat—and square. No doubt in her mind. And she was not alone. Even after I abandoned flat earth views she still had plenty of people who agreed with her.

With whom, then, will you compare God? To what image will you liken him? As for an idol, a metalworker casts it, and a goldsmith overlays it with gold and fashions silver chains for it. A person too poor to present such an offering selects wood that will not rot; they look for a skilled worker to set up an idol that will not topple.

Do you not know? Have you not heard? Has it not been told you from the beginning? Have you not understood since the earth was founded? He sits enthroned above the circle of the earth, and its people are like grasshoppers. He stretches out the heavens like a canopy, and spreads them out like a tent to live in.

There you have it. The earth is flat—and round. Isaiah clearly says that God sits above the circle of the earth, though the information is only incidental to the passage which is about something else entirely.

What Else Do Flat-Earthers Believe?

Flat earth beliefs are actually quite detailed, and we will talk about them next time.

Articles in this series:
I Was a Fifth-Grade Flat-Earther

26 Responses to I Was a Fifth-Grade Flat-Earther