How Do Flat-Earthers Envision the Flat Earth?

Posted on April 29, 2019 by jesuswithoutbaggage

Flat-earthers believe they know precisely how the continents are configured on a flat plane. And it is quite different from the way global-earthers envision the continents.

Globalists understand the earth to be a sphere, of course, with the arctic to the north and the continent of Antarctica to the south. For convenience, the earth is divided into perpendicular lines of longitude (or meridians) that run north to south all around the globe. These meridians are used for navigation and also help to establish time zones around the world. Since the earth is a sphere, these meridians meet at the very top and at the very bottom of the world and are most distant from each other at the equator, which is at the center between north and south.

So if you spread out the entire map of the earth in order to see the entire thing at once, it would look something like this: 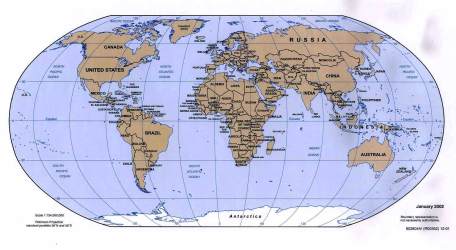 Flat-Earthers See the Earth Much Differently!

‘No!’ says the flat-earther. ‘This is not the way it is at all—not even close!’

Flat-earthers contend that the earth is not a sphere at all but a flat plane. Flat does not mean there are no mountains or depressions but that there is no curvature of the earth. In addition, they do not see the continents arranged as on the map above but more-or-less clustered together in the center of the earth—joined at what globalists would call the north pole, as depicted in the map below. 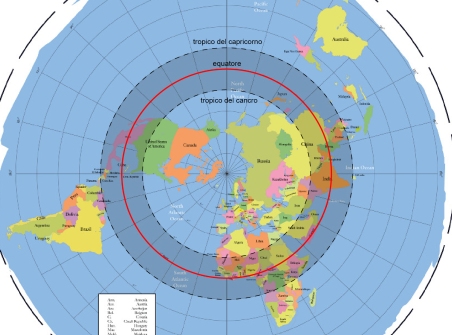 Notice that there is a red circle that runs through a number of countries. This is the Equator, and on either side of the Equator can be seen the circles of the Tropic of Cancer and the Tropic of Capricorn. They are parallel to each other, but they do not encircle a spherical earth.

Also notice the lines that run from the very center of the map to the edges. These represent what we call the degrees of longitude (meridians). But, unlike the global map where the meridians converge at the northern and southern points of the earth and are widest apart in the middle, the flat-earth meridians converge at the North Pole in the center of the map and spread apart increasingly from there never to re-converge at the other end. In fact, it is at their other ends that they are most widely separated.

This is very important to remember! Strangely, the flat earth map is almost identical to the United Nations logo. 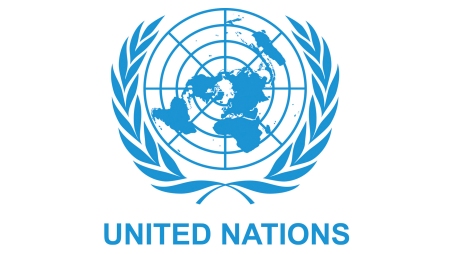 Where is the Continent of Antarctica?

It appears, at first, as though the continent of Antarctica is completely missing from the flat earth map, but this is not the case. If you look again, you will see a while space that encircles the entire map including the continents within it. This is Antarctica. But it is not perceived as a continent but as an ice mountain range that surrounds the edge of the earth. It forms the edge of the world and, in part, prevents the oceans from flowing over the sides. So when one approaches what we call Antarctica they are really thought to be approaching the ice mountain range that circles the earth.

I find this really strange to maintain because ships regularly visit Antarctica, and I assume that airplanes have flown over essentially the entire mass, but there is no suggestion from observation that Antarctica is anything other than a continent. It seems to me that the idea of an earth-encircling ice mountain range is easily disproved.

You will notice that the meridians are widely separated as they approach the edge of the flat world. This supports the idea that the coast of Antarctica is much larger than it appears on a global map. As I mentioned earlier, this is important to remember—because this means that travel in this area (the outside portion of the flat earth) would take much longer from meridian to meridian than in the center of the map. You can see on the flat earth map that it is easy, and quick, to travel by plane from Russia to Canada, for example, because they are so close together. This is actually true.

But the claim is that travel, say, from Australia to Argentina along the parallels would take much, much longer because of the way the meridians are more spread out. Now it is true that the trip would take longer than one from Russia to Canada because, even on a global map, Australia and Argentina are not nearly as close to the convergence of meridians to the south as Russia and Canada are to the north.

However, flat-earthers anticipate a much longer trip across the separated meridians. Periodically, flat-earthers repeat stories excitedly that ‘confirm’ that travel through this area has taken much longer than expected; but I have never heard the same from ships and planes in general. I would expect that, if this were true, we would regularly have many such reports from general sources. So I am not convinced.

What about the Sun, Moon, Stars, and the Space Program?

Flat-earthers definitely have strong ideas about these topics, and we will talk about them next time.

8 Responses to How Do Flat-Earthers Envision the Flat Earth?