This blog is based on discoveries made during my spiritual journey which began as a fundamentalist at seven years old. I am now in my early sixties. What was I doing all that time?

First of all, I have been very active in churches. I grew up in Free Will Baptist Churches, which are quite fundamentalist. My father was a pastor, so I went to quarterly conferences and youth camps and visited other congregations. I also became very involved in personal evangelism or ‘leading others to Jesus’. My family also appeared at other churches as a singing family; I played bass.

I fed on books by John R. Rice, Jack Hyles, and the Sword of the Lord. I listened to Carl McIntire, Lester Roloff, and Oliver Greene on the radio.

Just after high school, I became Pentecostal. I was part of two large denominations: first the Church of God, Cleveland and then the Assemblies of God, which are evangelical bodies. As my beliefs slowly changed, I became part of the Presbyterian Church, USA, which is a more mainline denomination.

My BA in Biblical-Historical Studies is from Lee College (now Lee University), the school of the Church of God, Cleveland. I also took a couple of classes at the Church of God Seminary, but was unable to continue my formal education due to relocation. While in school I did a bit of preaching, a considerable amount of personal evangelism (including a summer mission in Philadelphia), church work, and independent study.

The bulk of my career was 21 years in the Christian Bookselling industry. I worked for seven years for the Church of God bookstore chain, Pathway Bookstores, with most of that as manager of the home store in Cleveland, Tennessee. For fourteen years, I was a manager for Family Christian Stores, the predominate Christian chain in America. For the last seven of those years, I was the Southeast District Manager for the chain. 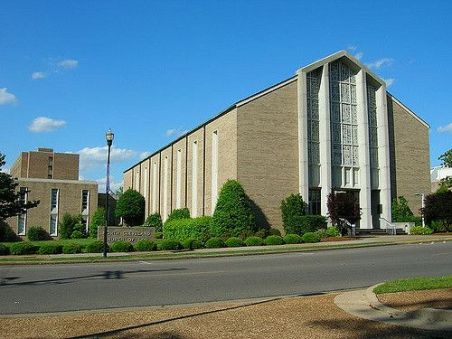 In Cleveland, Tennessee, the home of the Church of God General Offices, Lee College, the Publishing House, Seminary, and other departments, I was involved in the leading congregation of the denomination, North Cleveland Church of God. Among other things, I taught Evangelism Explosion classes, directed the Children’s Church and staff, served on the Christian Education board, led a route for the bus ministry, and assisted at the largest mission congregation, Crowder Chapel.

After moving to Memphis, we joined the large Raleigh Assembly of God, and the pastor asked me to develop and lead a New Members Class, which I did. In relocating to Florida, I taught a new adult class at the Apopka Assembly of God, which quickly became the largest adult class in the congregation.

When we transferred to the First Presbyterian Church of Maitland, I was soon invited to become part of a rotation of teachers for an adult class there.

While working as the bookstore manager in Cleveland, I also did a number of writing assignments for denominational educational material, which included various adult curricula and some youth and children’s materials.

Throughout my youth and my adult life, I have been an avid reader of religion and theology. A fairly high level of individual study has characterized of every stage of my journey. It was not unusual for me to commit 10+ hours in preparation for teaching a Sunday school lesson.

Shortly after joining Family Bookstores in 1984, I was invited to be a judge for the Evangelical Christian Publishers Association (ECPA) annual Medallion Awards and I continued as a judge for 20 years. During most this time, I read and evaluated the best theological books published each year by evangelical publishers. For a number of years, I evaluated two categories at once–the other being commentaries.

I am not a scholar, but I read the scholars.

None of this makes me an expert, but hopefully it does indicate that I do not come by my conclusions lightly and without reference to the arguments against them. In any case, I state my qualifications not to persuade anyone to accept my conclusions but only that they have some sense of where my journey has taken me.

This site uses Akismet to reduce spam. Learn how your comment data is processed.