Why Do Inerrantists Think the Bible is Inerrant Anyway?

Posted on February 11, 2019 by jesuswithoutbaggage

Sometimes I get the objection from inerrantists that ‘God would not leave us a defective Bible’. This assumes, of course, that God has somehow given us a ‘Bible’ in the first place. It diminishes the contributions of the individual writers as though they wrote under God’s dictation or influence, or at least that God protected the ‘Bible’ so that everything in it is true.

Of course, this is merely an assumption without basis except for the inerrantists’ wishful thinking and craving for absolute certainty. It ignores the use of ancient writing practices—including genres that are not literal or historical such as myth, story, poetry and so forth. It also neglects the limitations of the various authors’ eras, cultures, and inadequate grasps of God’s character compared to what we find revealed by Jesus.

The Warning of Revelation 22

Another very weak support for inerrancy is the appeal to Revelation 22:

This is used as a warning not to mess with the Bible, but this passage is not about the Bible but only about the Book of Revelation, which is very appropriate for the mysterious and dramatic apocalyptic work that it is.

The Queen of All Inerrancy Proof-texts

The most frequently used ‘proof’ for biblical inerrancy is 2 Timothy 3:16-17:

All Scripture is God-breathed and is useful for teaching, rebuking, correcting and training in righteousness, so that the servant of God may be thoroughly equipped for every good work.

It is often presented triumphantly as the obvious ‘end of the question’ beyond which there is no need to challenge inerrancy further. But I have three questions.

1. Who wrote this? Inerrantists will answer that Paul wrote it because it begins, ‘Paul, an apostle of Christ Jesus’, and since the Bible is inerrant then we can be confident that it was Paul. But among critical scholars some Pauline books are universally accepted as genuine, a few are considered questionable, but 2 Timothy is, so far as I know, universally thought to be NOT written by Paul. So it does not carry Paul’s supposed authority in any way.

2. What does this passage actually say? That we can learn a lot from the Old Testament to our benefit or to train others. Can I say that I agree with that? This would be especially true when this passage was written because the New Testament did not yet exist. But what does ‘God-breathed’ mean? I don’t know what the author intended by this word but I don’t think they meant inerrant.

3. Is this passage, itself, included in any inerrancy claim? No! How can it be? Whatever is meant by ‘God-breathed’ is applied to the Old Testament only as there was no New Testament at the time. And can whatever inerrancy claim being made reach back and include this very passage as an inerrant declaration? No! That would be circular reasoning of the basest sort.

Inerrancy is Nothing More than a Presupposition

Inerrancy is a presupposition. You are not likely to hear this from the rank and file, but inerrantist leaders know this and even defend it. The apologetic of presuppositionalism was developed by fundamentalist Cornelius Van Til, a close companion to J. Gresham Machen during the denominational fundamentalist wars.

This means the apologist must presuppose the truth of God’s word from start to finish in his apologetic witness. A “presupposition” is an elementary assumption in one’s reasoning or in the process by which opinions are formed. As used here, a “presupposition” refers not to just any assumption in an argument, but to a personal commitment which is at the most basic level of one’s network of beliefs.

Presuppositions form a wide-ranging, foundational perspective (or starting point) in terms of which everything else is interpreted and evaluated. As such, presuppositions have the greatest authority in one’s thinking, being treated as your least negotiable belief and being granted the highest immunity to revision.

I think we can see why inerrantist conclusions on a significant number of beliefs inevitably conflict with progressive views which are not based on this presupposition.

Which Document is Supposed to be the ‘Inerrant’ One? 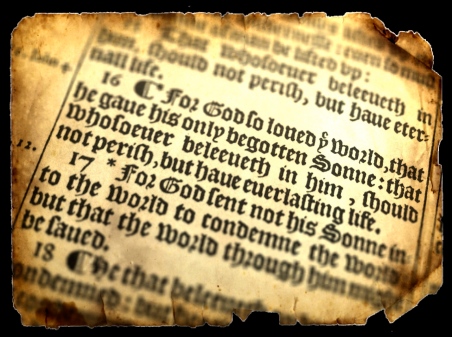 Officially, the Bible is considered inerrant in its original manuscripts (autographs)—none of which we have. As normally practiced among English readers, however, the English translations are treated as inerrant (the Bible clearly says!). However, I was raised in King James only circles where only the KJV was considered appropriate. There were a lot of us! Many even specified the KJV 1611, but I don’t think that is what they meant because they did not read the 1611 in their homes or churches; and they would have found it difficult going had they tried. They probably meant the 1769 Oxford edition.

What About Claims that Jesus, Himself, Confirms the Inerrancy of the Old Testament?

Even if the proofs we have discussed are weak and ineffective, surely Jesus’ confirmation of the inerrancy of the Old Testament is sufficient. We will talk about that later.

Articles in this series:
Belief in Biblical Inerrancy Must be the Second Most Damaging, Misguided Christian Belief of All
Why Do Inerrantists Think the Bible is Inerrant Anyway?
How the Bible Actually Works by Peter Enns: a Book Review
Did Jesus Confirm the Inerrancy and Historicity of the Old Testament?
5 Common False Assumptions Inerrantists Make about Me as a Progressive Believer
Inerrantists are My Brothers and Sisters in Jesus—Not My Enemies

133 Responses to Why Do Inerrantists Think the Bible is Inerrant Anyway?