Posted on September 3, 2018 by jesuswithoutbaggage

Most of us know that some books in the New Testament were not written by the person claimed in the book—such as 1 and 2 Timothy and Titus. Ehrman calls these books forgeries, which at first sounded a bit harsh to me. I had often repeated the explanation I heard from others that, though these books were not from Paul, they were written by his disciples in the spirit and authority of Paul’s teaching, which was a common practice among ancient students. What’s wrong with that?

Ehrman says there is plenty wrong with that assumption. He surveys how genuine authors in antiquity responded to such books, and they were NOT happy. They flat-out called them forgeries. Then he showed how early Christians were also unhappy with such books and considered them forgeries as well.

I found Ehrman somewhat convincing on this point and had to agree that books like 1 Timothy, 2 Timothy, and Titus are, indeed, deceitful forgeries. 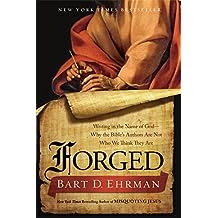 Homonymous books are written by the person who claims to have written it. This includes Romans, Galatians, 1 and 2 Corinthians, 1 Thessalonians, Philippians, and Philemon. Ehrman also includes the book of Revelation which claims to be written by a John but not by John the apostle, so if someone assumes him to be the apostle it isn’t the author’s fault. 8 books.

Anonymous books. Many New Testament books do not name the author at all. This would include the four Gospels, Acts, 1, 2, and 3 John, and Hebrews—9 books.

Pseudepigraphal books are anonymous books to which a name has been attached by someone other than the author; the author is not attempting to deceive. This is the four Gospels. I don’t know why the three letters of John are not included here. 4 books.

Forgeries claim to be written by an author who did not write them and are deceitful by intention. Ehrman lists in this category Acts, 1 and 2 Timothy, Titus, 2 Thessalonians, Ephesians, Colossians, 1 and 2 Peter, Jude, and James. 11 books.

Ehrman considers 41% of the 27 New Testament books to be forgeries. I think that pushes the idea too far. There could be other reasons a person’s name is incorporated into a book they did not write.

Where I Do Not Find Ehrman to be Persuasive

I am now convinced that it might be appropriate to call the books of Timothy and Titus forgeries though I previously was not. But sometimes I do NOT find Ehrman convincing.

Acts. Even though Acts is anonymous, Ehrman thinks the author attempted, with the ‘we passages’, to lead people to believe he was Luke—which makes Acts a forgery. Ehrman does not think the author of Acts was a follower of Paul because of discrepancies with what Paul says about himself. These objections seem thin to me and a different understanding could be just as likely. I am not persuaded.

Matthew and Luke. Ehrman accuses the authors of Matthew and Luke of stealing for taking Mark’s work and publishing it as their own. But neither anonymous author suggests that his work is his own, and Luke even mentions that he had sources.

2 Thessalonians. Ehrman considers this book a forgery in part because 1 Thessalonians indicates that Jesus’ return is imminent while this book says that other things must happen first.

Illiteracy. Ehrman rejects the stated authorship of some books, in part, because the people associated with the books were illiterate and incapable of such writing. I think—using secretaries!

Secretaries. Anticipating my objection (not really, for this is a common suggestion), Ehrman dismisses the secretary theory because the Greek is so polished that it would essentially have to be written by the secretary. Why is this difficult? I accept the letters as being from the authors as long as they approved the result.

I think there are weak arguments elsewhere as well. You read it and decide.

More About the Book

Forged (2011) is the first of two books Ehrman wrote on this subject. It is about 300 pages long, and the style is very accessible to the general reader. There are notes in the back of the book, but they are not extensive and can easily be ignored with little loss to the content. If you like ancient Christian literature you should really enjoy this book as Ehrman does not limit himself only to the New Testament but also discusses Christian forgeries in the centuries after Jesus.

Ehrman’s second book on the topic is Forgery and Counterforgery: The Use of Literary Deceit in Early Christian Polemics (2013). This book is much more in-depth with extensive footnotes at the bottom of the page and is about 600 pages long. However, it is still quite accessible to the general reader. Ehrman sometimes uses Greek, but it is not extensive and can be ignored by the non-Greek reader with little loss. So don’t be afraid of choosing this volume for the more in-depth content; Ehrman does not talk above the non-scholar’s head.

These books were recommended to me by a regular reader of Jesus without Baggage. When I told them I already had a long reading list, they offered an Amazon gift certificate to cover the cost of the larger book which they heavily recommended. Well, how could I turn that down! However, being the cheap bibliophile that I am, I bought used copies of both books for the value of the gift certificate. Thanks anonymous reader!

I read the first book and am working on large sections of the second book in areas where I am most interested. I will either scan or read the remainder of the book later.

Even if you disagree with Ehrman, I don’t think you will be disappointed with either of these books.

The fact that some New Testament books are mis-attributed brings up a practical question—are these documents inerrant? Do they still have value? We will talk about that next time.