Posted on September 17, 2018 by jesuswithoutbaggage

When I was a teenager, I listened to some fundamentalist preachers talking among themselves. One asserted that he believed Hebrews was written by Paul! I am sure the other preachers agreed. I was not well-read, but I was aware that many people did not believe Paul wrote Hebrews; so my reaction was ‘Why?’ (I didn’t ask the question aloud).

Why would he think so? Tradition? Because it was the conservative position? I greatly doubt that he came to that conclusion by carefully comparing Hebrews with other books by Paul. But someone so convinced that Paul wrote Hebrews is certainly unlikely to agree that Paul did not write 1 Timothy. It’s right there in the first sentence of the book:

And yet nearly all scholars agree that Paul did not write 1 Timothy. Or 2 Timothy. Or Titus–the pastoral letters. In fact, as we discussed before, scholar Bart Ehrman actually calls them forgeries—and I must agree. Paul did not write them, and the person who did write them attempted to deceive readers into thinking that they WERE from Paul. If this is true then what authority do the pastorals have? 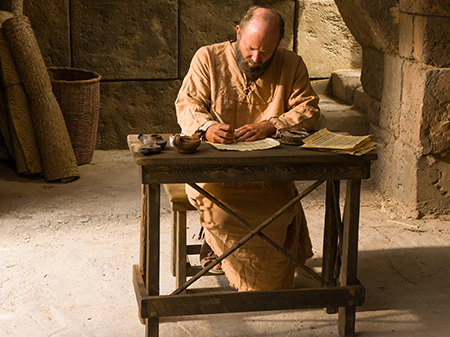 In his book, Forged, I think Ehrman makes a more convincing case for the purposeful deceit of Pauline authorship in the pastorals than anywhere else. Here is a summary of some of the things he says in his discussion of these books on pages 93-105. First of all, he thinks the pastoral epistles were all written by the same person. They share many words and phrases together.

But the words of the pastorals do not match those in Paul’s genuine letters. Ehrman points out that 306 of the 848 different words used in pastorals (over one third) are not found in any other letter by Paul. But about two thirds of the 306 words are used by Christian authors living in second century—indicating that the pastorals come from a period later than Paul and with different issues.

For example, the false teachings addressed in 1 Timothy do not match issues from Paul’s time; they sound like second century Gnosticism. In addition, Paul encouraged believers to remain single because the end was near, whereas the pastorals state that leaders must be married.

Another example is that for Paul the gifts of the Spirit make everyone equal: slaves and masters; women and men. Paul told the Corinthians to use gifts for mutual good and did not appeal to leaders to control situations because there were no leaders—no pastors, bishops, or deacons; no hierarchy, structure, or organization, because they were expecting Jesus to come right away and had no time to develop those things.

Sometimes the author of the pastorals uses the same words as Paul but with different meanings, and some ideas and concepts in the pastoral are at odds with the authentic letters of Paul. For example: when Paul talks about works he means works of the Law, whereas the pastorals mean doing good works.

So the evidence suggests that the pastorals were written in Paul’s name by someone after Paul’s death. The deceit is further supported by personal references such as 2 Timothy 4: ‘When you come, bring the cloak that I left with Carpus at Troas, and my scrolls, especially the parchments’ apparently to make the letter more believable to those seeing it for the first time.

Can a Deceptively Written Letter by ‘Who Knows?’ be Authoritative?

In this light, can we then say that the pastorals are authoritative in any way? Or inerrant? I am sure most inerrantists would answer Yes! to both. But why? Just because they happen to be included in the Bible? Because God somehow guided the author to forge the letters in Paul’s name? But then inerrantists are likely to say that Paul DID write those letters. After all, it’s right there in the first sentence:

I don’t believe in inerrancy but we do often turn to biblical books for some level of authority and guidance, and sometimes we become upset with things we think Paul said.

Blaming Paul for What Someone Else Said in the Pastorals

People object to some of Paul’s statements, but should we be upset with Paul for something he never said? Here are a few examples of passages Paul didn’t write (see a related issue from Ephesians):

1 Timothy 2:11, ‘A woman should learn in quietness and full submission. I do not permit a woman to teach or to assume authority over a man; she must be quiet. For Adam was formed first, then Eve. And Adam was not the one deceived; it was the woman who was deceived and became a sinner.’ [I am aware of 1 Corinthians 14:34-35 which has special issues and should be considered separately]

1 Timothy 3:2, ‘Now the overseer [a male] is to be above reproach, faithful to his wife’

How about the NUMBER 1 inerrancy proof-text, 2 Timothy 3:16, ‘All Scripture is God-breathed and is useful for teaching, rebuking, correcting and training in righteousness.’ Paul didn’t write that! We have no idea who wrote it except that they wrote in Paul’s name.

Titus 2:9, ‘Teach slaves to be subject to their masters in everything, to try to please them, not to talk back to them, and not to steal from them, but to show that they can be fully trusted, so that in every way they will make the teaching about God our Savior attractive.’

Being aware of the problem of the pastoral letters helps us realize that there is no reason to blame Paul for things he did not say.

Articles in this series:
Bart Ehrman – Forged: A Book Review
How Should We Regard New Testament Books of Uncertain Authorship?
Blaming Paul for Things He Never Said
The Special Case of Women Keeping Silent in the Church in 1 Corinthians

69 Responses to Blaming Paul for Things He Never Said