Hopeful Universalism and a Gentle Alternative

Posted on October 15, 2018 by jesuswithoutbaggage

Previously, we discussed whether God will punish anyone in eternal hell; and I concluded that the misguided idea of punishment in eternal conscious torment is inconsistent with God’s character and that the Bible does not even teach such a thing.

Many people ask, ‘How can Hitler NOT be punished?’ I suspect that Hitler, with a clear mind and healed of his brokenness, will need nothing less than God’s abundant love to rescue him from his own deep anguish over what he did.

But this, then, raises the question: ‘If there is no eternal punishment in the afterlife, does this lead to Universalism—the idea that everyone will live forever with God after death?’

Perhaps; but perhaps not. 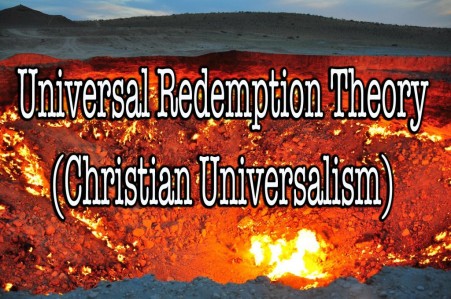 Universalism is the idea that all people will, at some point, be reconciled to God—that God’s love will draw in every individual, and this is not a new idea. According to the New Schaff–Herzog Encyclopedia of Religious Knowledge (1912), of the six theological schools in the first five hundred years of the church, Carthage/Rome taught eternal hell, Ephesus taught conditional immortality, and the other four schools were all Universalist —Alexandria, Antioch, Caesarea, and Edessa/Nisibis.

Some (even among Universalists) anticipate a corrective purging. But, if this is so, I don’t think it involves punishment either. In The Great Divorce, C. S. Lewis describes his imaginative view of this purge with a visitor to Heaven who has a little red lizard sitting on his shoulder twitching its tail and whispering things in his ear. A resident of Heaven offers to remove it and the man resists but finally agrees—leading to two wonderful results. The entire brief story is well worth reading.

It seems that the first clear mention of endless torment in hell was in Tatian around 155-165 AD—about a hundred years after the deaths of Paul and Peter. The Latin (Roman) church fathers, Tertullian (about 155-240 AD) and Augustine (354-430 AD), had big impacts on spreading the idea of endless punishment in hell rather than a temporary purging.

The earliest influential Universalist church fathers were Greek rather than Latin, such as Clement of Alexandria (about 150-215 AD), Origen (about 184-253 AD), and Gregory of Nyssa (about 335-395 AD).

What Does the Bible (Possibly) Say about Universalism?

Many believers insist the Bible teaches eternal punishment in hell, but there are biblical passages that suggest Universalism, including one of the most famous passages John 3:16-17:

For God so loved the world that he gave his one and only Son, that whoever believes in him shall not perish but have eternal life. For God did not send his Son into the world to condemn the world, but to save the world through him.

Not only do I think that many believers are mistaken in their understanding of John 3:16, but they seem to ignore verse 17—God sent Jesus to save the world—not to condemn it!

I, when I am lifted up from the earth, will draw all people to myself…If anyone hears my words but does not keep them, I do not judge that person. For I did not come to judge the world, but to save the world.

For I am convinced that neither death nor life, neither angels nor demons, neither the present nor the future, nor any powers, neither height nor depth, nor anything else in all creation, will be able to separate us from the love of God that is in Christ Jesus our Lord.

As in Adam all die, so in Christ all will be made alive.

Paul might have thought Adam was historical and introduced sin to humanity, but he also sees Jesus as the total remedy for humanity. ‘All’ = ‘All’. It is the same ‘All’.

All this is from God, who reconciled us to himself through Christ and gave us the ministry of reconciliation: that God was reconciling the world to himself in Christ, not counting people’s sins against them.

Therefore God exalted him to the highest place and gave him the name that is above every name, that at the name of Jesus every knee should bow, in heaven and on earth and under the earth, and every tongue acknowledge that Jesus Christ is Lord, to the glory of God the Father.

For God was pleased to have all his fullness dwell in him, and through him to reconcile to himself all things, whether things on earth or things in heaven, by making peace through his blood, shed on the cross.

We have seen and testify that the Father has sent his Son to be the Savior of the world.

Now I don’t care for proof-texting, and I admit that these proof-texts are not conclusive in supporting Universalism, but they are certainly as convincing as those used to support eternal punishment in hell.

But There is Another, Stronger Support for a Potential Universalism

I think a more important support for Universalism is God’s character. Despite misguided belief some have for an angry, violent, vindictive God, I believe the God Jesus reveals to us is one of love, compassion, and care. Would such a God torment people in hell? I don’t think so—much less eternal torment. God is not for punishment but for restoration and reconciliation.

I am a hopeful Universalist; I hope it is true. Yet, I cannot be more than that for there is a further question. What if, finally, there are those who reject God’s offer of eternal life. What becomes of them? I think they experience a gentle alternative to punishment in hell called conditional immortality. We will talk about that next time.

Articles in this series:
How Some Misguided Christian Beliefs are Very Harmful
Belief in Angry God is Perhaps the Most Damaging, Misguided Christian Belief of All
If We Are Free to Approach God Without Fear, What Becomes of Our Other Religious Fears—Like Hell?
Hopeful Universalism and a Gentle Alternative
A Gentle Alternative to Punishment in Hell for Those Who Reject God’s Offer of Eternal Life—Conditional Immortality

121 Responses to Hopeful Universalism and a Gentle Alternative