Sheep, Goats, and the Bosom of Abraham

Posted on July 9, 2018 by jesuswithoutbaggage

When I was a teenager, a guest minister preached on Sheol and hell pointing out that Sheol was transferred from where it was originally to somewhere else, and it was connected with the bosom of Abraham. He did not present it as speculation but as an arcane bit of knowledge that actually happened.

I have never heard such a thing before or since, but he is not the only person to try to explain how the rich man in burning hell was able to see the beggar Lazarus in the bosom of Abraham.

But I think I have an answer! It is not an arcane answer at all but a simple one—the story of the rich man and Lazarus is a parable. That’s all—it’s a parable.

The Rich Man and Lazarus

The story is found in Luke 16:

There was a rich man who was dressed in purple and fine linen and lived in luxury every day. At his gate was laid a beggar named Lazarus, covered with sores and longing to eat what fell from the rich man’s table. Even the dogs came and licked his sores.

The time came when the beggar died and the angels carried him to Abraham’s side. The rich man also died and was buried. In Hades, where he was in torment, he looked up and saw Abraham far away, with Lazarus by his side. So he called to him, ‘Father Abraham, have pity on me and send Lazarus to dip the tip of his finger in water and cool my tongue, because I am in agony in this fire.’

What do we learn from this passage? Righteous people join Abraham at death? Hades (Sheol), which elsewhere in the Bible only means death, has an element of punishment—in fire? And people in each place can see and talk with each other?

None of these things are suggested anyplace else in the Bible, and yet so many people are certain that this passage gives us insight into the state of those who die. It does NOT. It is only a parable. The details of a parable mean nothing on their own but simply set the stage for the main point.

The rich man then appeals to Abraham:

‘Then I beg you, father, send Lazarus to my family, for I have five brothers. Let him warn them, so that they will not also come to this place of torment.’

Abraham replied, ‘They have Moses and the Prophets; let them listen to them.’

‘No, father Abraham,’ he said, ‘but if someone from the dead goes to them, they will repent.’

And then comes the main point—the only point of the parable:

He said to him, ‘If they do not listen to Moses and the Prophets, they will not be convinced even if someone rises from the dead.’

That’s it! This is the entire reason Jesus told this parable. Now what do we learn? If we do not respond to the message, then someone rising from the dead will not convince us either. It has nothing to do with punishment in hell.

The Sheep and the Goats 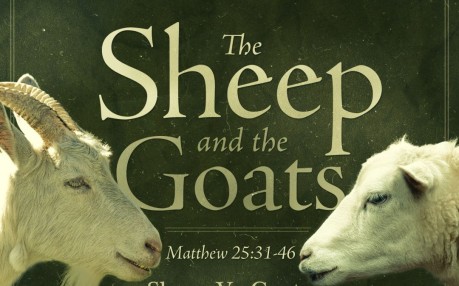 Another parable creates a lot of confusion about the end-times. It is found in Matthew 25:

When the Son of Man comes in his glory…he will separate the people one from another as a shepherd separates the sheep from the goats. He will put the sheep on his right and the goats on his left.

Then the King will say to those on his right, ‘Come, you who are blessed by my Father; take your inheritance, the kingdom prepared for you since the creation of the world. For I was hungry and you gave me something to eat, I was thirsty and you gave me something to drink, I was a stranger and you invited me in, I needed clothes and you clothed me, I was sick and you looked after me, I was in prison and you came to visit me.’

Those on the right ask when had they done these things, and the King replies:

‘Truly I tell you, whatever you did for one of the least of these brothers and sisters of mine, you did for me.’

They also ask when had they not done these things, and the answer is:

Some insist that this passage reveals details about the final judgment and that the ‘goats’ will be punished in eternal fire. Not so! These are only details leading to the main point, which is the great importance of helping the needy.

Why Should We Think These are Parables?

In the past, a number of people have asked why I think these are parables and not insights into hidden realities? Neither Jesus nor the writers say they are parables.

I don’t know that Jesus ever says, ‘Let me tell you a parable’; he just begins the story. And the writers often don’t introduce ‘parables’ either. Jesus was fond of telling parables, and both these stories read like parables, feel like parables, and are structured like parables with an interesting story followed by an important lesson at the end. There is no reason to think they are NOT parables.

So there is no insight into the end-times here.

In this series: Zorastrianism, the Book of Enoch, and Eternal Fire:

Sheep, Goats, and the Bosom of Abraham
What Did Jesus Mean by the ‘Eternal Fire Prepared for the Devil and His Angels’?
The Influence of Zoroastrianism on Jewish Thought in Jesus’ Time
The Origin of Satan and His Demons in the Book of Enoch
Judgment and Punishment in the Book of Enoch

121 Responses to Sheep, Goats, and the Bosom of Abraham