If Most Everyone Will Have Eternal Life with God Anyway, then Why Do We Need to Share the Good News of Jesus?

Posted on June 19, 2017 by jesuswithoutbaggage

Recently we discussed whether those who have not heard the good news or who even follow other religions might receive eternal life and live in God’s community after death—even if they never became followers of Jesus during this lifetime. My conclusion was ‘Yes!’; they are included in the results of Jesus’ victory over death at his resurrection.

This suggests the possibility that everyone who ever lived might live forever in God’s community, though perhaps some could reject eternal life with God as an expression of their free will. Of course, this runs counter to the widespread and very vocal view that those who do not accept Jesus during this lifetime will be punished and tortured forever in a burning hell.

In fact, the primary motivations among those who believe in eternal punishment in hell seem to be 1) to do whatever is necessary to avoid hell for themselves, and 2) to warn as many other people as possible to become Christians and avoid hell as well. This is the impetus for reaching others through evangelism and missions so that they can ‘accept Jesus’, become Christians, and avoid eternal hell.

If their presumption of punishment hell were true, then this sort of action would be of the highest importance, but I do not share this view of punishment in hell. However, I do acknowledge that this issue raises an important question: If eternal life with God is already available to everyone…

Then Why Do We Need to Share the Good News of Jesus at All? 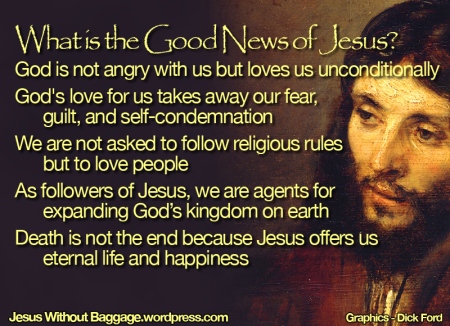 I think this is a reasonable question to ask, and I think I can provide a reasonable answer. That we can live in the happiness of God’s community after we die is an important part of the good news of Jesus—but it is only one part. There are at least four additional points to the good news and they all pertain to this life—not life after death.

It is wonderful to learn that God is not angry, harsh, and vindictive toward us as some suppose; instead God wants to provide us peace, healing of our brokenness, and reconciliation with God, ourselves, and others (instead of alienation)—in this lifetime! God takes away our fear, guilt, and self-condemnation—in this lifetime! We are not asked by God to adhere to a list of legalistic religious rules but to love other people and to treat each other right—in this lifetime!

This is all good news and applies to us in this lifetime. Without hearing this good news, people will miss the benefits from it, and they are every bit as important as knowing we have eternal life after death. Some might point out, legitimately, that those who have not heard or who follow other religions do not necessarily think God is angry, harsh, or vindictive; they do not necessarily feel insecurity, brokenness, or alienation; and they do not necessarily carry fear, guilt, or condemnation.

This is all true. In fact, while an important aspect of Jesus’ teaching and example is to treat people with empathy, compassion, and care, most religions and philosophies teach very similarly—and this is good! However, there is an aspect of Jesus’ teaching of the good news that goes beyond all these things, and it is one in which all believers are expected to be involved; it is important—and it pertains to this life.

Treating people with empathy, compassion, and care demonstrates a proper heart—no matter what the religion or lack of religion. Treating others with dignity, respect, and acceptance is among the highest expressions of humanity and is found among people throughout the world.

Of course Jesus emphasized loving others, and those who follow him should follow him in the way he treated people. But this is not all there is in following Jesus. An important aspect of the good news of Jesus involves what he calls the ‘kingdom of God’. The western world does not relate to the concept of ‘kingdom’ quite the way that Jesus’ audience would have. Were Jesus teaching today he would likely use a different cultural term—perhaps ‘community of God’.

The community of God is not a visible, organized movement but a loose network that expands through every nation and culture. However, the community of God is counter-cultural and part of its purpose is to speak to power, greed, and domination in the system—just as Jesus did in his day (and for which he was executed).

When Jesus told us we should pray that God’s kingdom come and God’s will be done—ON EARTH, I think he meant it. This is important work—in this lifetime! So I think, in addition to being able to look forward to life in God’s community after death, it IS important for us to share all these aspects of the good news with everyone in the world because they impact us, and the world, in this lifetime.

What is Our Role as Citizens of the Kingdom of God?

Articles in this series: Jesus, World Religions, and Eternal Life

15 Responses to If Most Everyone Will Have Eternal Life with God Anyway, then Why Do We Need to Share the Good News of Jesus?