The Bible Does not Teach Mandatory Tithing for Believers: Answering False Proof-texts

Posted on October 17, 2016 by jesuswithoutbaggage

For decades I attended churches where pastors preached that the Bible requires believers to pay tithes to the church. Not only is mandatory tithing unbiblical—it is a harmful doctrine. In the next post I will share why mandatory tithing is harmful, but first we must deal with the major proof-text claims used by proponents of mandatory tithing. 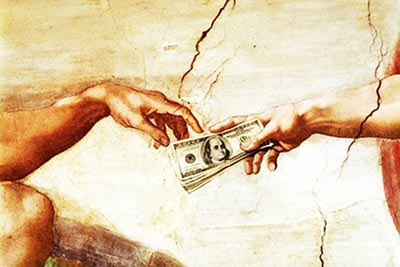 Will a man rob God?

The Granddaddy of Mandatory Tithing Proof-Texts

In my personal experience and reading, one tithing proof-text rises to the top as the go-to passage for mandatory tithing, and it carries within it elements of both fear and greed, which are often used to convince believers to tithe to the church.

I am sure you have heard it; Malachi 3 reads:

“Will a mere mortal rob God? Yet you rob me.

“In tithes and offerings. You are under a curse—your whole nation—because you are robbing me. Bring the whole tithe into the storehouse, that there may be food in my house. Test me in this,” says the Lord Almighty, “and see if I will not throw open the floodgates of heaven and pour out so much blessing that there will not be room enough to store it.”

There is no need to explore why the prophet wrote this because it has nothing to do with believers today. Notice that Malachi’s words address Jews of the late Old Testament period in Judea. It warns of a curse for not tithing and promises blessings for observance. Does this not sound like the approach of many tithing sermons today—threats and/or promises?

I contend that this passage does not apply to believers. It does, however, bring us to another text on tithing.

Leviticus, Numbers, and Deuteronomy mention tithing a lot; it was important in the Law of Israel. There are a lot of details, but we learn what tithing was all about from Numbers 18:

The Levites had no ancestral land in Israel, so they received the tithe for their work in the tabernacle and later in the temple. A church is not the tabernacle or the temple, and pastors are not Levitical priests. Remember that Malachi says, “Bring the whole tithe into the storehouse, that there may be food in my house.” Churches are not that storehouse.

There is nothing in the teaching of Jesus or elsewhere in the New Testament that transfers Israel’s tithing obligation to followers of Jesus.

Does Abraham’s and Jacob’s Tithing Set a Precedent for Followers of Jesus?

Some say that because Abraham gave a tithe to Melchizedek the priest we should follow his precedent. I HOPE NOT. Genesis 14 tells us that Abraham led a coalition to defeat the four kings who had:

Seized all the goods of Sodom and Gomorrah and all their food; then they went away. They also carried off Abram’s nephew Lot and his possessions.

Abraham recovered everything they took, and:

After Abram returned from defeating Kedorlaomer and the kings allied with him, the king of Sodom came out to meet him in the Valley of Shaveh…Then Melchizedek king of Salem brought out bread and wine. He was priest of God Most High, and he blessed Abram…Then Abram gave him a tenth of everything.

If we continue reading, though, we find that Abraham gave the other 90% to the king of Sodom—that totals 100%. This was a one-time tithing event, and it wasn’t even Abraham’s stuff that he tithed on.

Jacob did, indeed, promise to tithe to God in Genesis 28:

Jacob made a vow, saying, “If God will be with me and will watch over me on this journey I am taking and will give me food to eat and clothes to wear so that I return safely to my father’s household, then the Lord will be my God…and of all that you give me I will give you a tenth.”

Jacob says that he will give God a tithe IF God meets his specified conditions. This is certainly not a good model for us. In fact, neither Abraham’s nor Jacob’s tithe are patterns for us to emulate.

Did Jesus Affirm Tithing for Believers?

In my opinion: No! Mandatory tithing advocates often say that Jesus affirmed the practice of tithing in Luke 11, where he pronounced a list of woes on the Pharisees and mentioned tithing.

Woe to you Pharisees, because you give God a tenth of your mint, rue and all other kinds of garden herbs, but you neglect justice and the love of God. You should have practiced the latter without leaving the former undone.

Jesus’ emphasis is clearly on the Pharisees’ picky legalistic practices. True, he did not dispute their tithing; after all, the temple was still standing and tithing was appropriate. However, Jesus does NOT validate tithing as mandatory for believers—especially after the temple was destroyed. It just isn’t here.

34 Responses to The Bible Does not Teach Mandatory Tithing for Believers: Answering False Proof-texts