How Important are ‘Correct Beliefs’ to God?

Posted on July 5, 2016 by jesuswithoutbaggage

Many believers think people who claim to be Christian but stray too far from ‘correct beliefs’ are not Christian at all. And the corollary is that they are going to hell—just for not getting their beliefs right!

I used to think much the same way. I accepted some other denominations as Christians even though I considered them seriously misguided; but others were heretics whose beliefs went far beyond what was acceptable for Christians.

Someone invited two Mormon missionaries to an informal gathering at my Christian college. At the end of the argumentative session a student wished them ‘Godspeed’. I replied, ‘No! I will NOT wish them God-speed!’–because they were the enemy. Their beliefs disqualified them from being Christians.

Right beliefs have been important to Christians since early times. The Gnostics had ideas completely incompatible with ‘orthodox’ believers, and orthodox believers appropriately exposed their ‘errors’. But the Gnostics did follow Jesus, so in my opinion God did not reject them.

The Arians are an even better example. The mere fact that they did not consider Jesus co-eternal with the Father brought outrage and persecution from others in the Church. I don’t think there is any doubt that the Arians were Christians. The Father loved and accepted them as much as any other believer.

From early on, believers have excluded other believers from the church; and, after the Roman Empire accepted Christianity, Christians even began executing other Christians for their beliefs. My own ancestors came to America to escape the persecution and killing of Protestants in France.

Protestants were not completely innocent, either; remember that John Calvin approved Servetus being burned alive for denying infant baptism and the orthodox view of the trinity. I have no doubt that Servetus was a genuine Christian—he just disagreed on certain doctrinal points.

I was raised in an environment where Catholics were not considered Christian because of their many ‘false’ beliefs. I remember we were very troubled when Kennedy was elected president, and as a 7th grader I celebrated his assassination.

I don’t think God judges us because of our mistaken beliefs.

Beliefs are important because beliefs influence our actions, and some bad beliefs lead to really bad consequences. But our problem is we don’t have enough information to establish the ‘correct’ belief on practically any theological point. I wish God had given us clear, proper doctrines and practices, but he didn’t—despite what some people say.

I don’t think God judges us on our beliefs

The resources we do have are the words and actions of Jesus (and Jesus was often quite cagey in sharing doctrinal specifics). He teaches us to love a loving God and to genuinely love EACH OTHER–not to reject each other because of differences in beliefs.

Yet many believers restrict other believers from the very thing that represents our unity as believers with the practice of closed communion, meaning that communion is closed to those outside their tribe. I am happy to have enjoyed taking communion with a large number of tribes in order to express our oneness as believers.

Beliefs should NOT be a barrier to accepting other believers as genuine followers of Jesus.

When Beliefs Really Do Matter

From Jesus and the New Testament writers, I believe that religious beliefs are not the most important thing in following Jesus. And the fact is, no two believers believe all the same things.

Instead, we are to follow Jesus’ teaching and example in caring for one’s self and other people. Love, empathy, compassion, and care is what we learn from Jesus and his earliest followers. This is also how we spread the kingdom of God on earth—by living in love, sharing the good news of Jesus, and caring for people instead of hurting them.

And that brings me to the serious subject of harmful beliefs; some beliefs lead to hurting people, which is contrary to Jesus’ teaching. There are many points with which I disagree with other believers but they are not worth fighting about.

But I do focus on the most harmful ones. In fact, I talk about them all the time. Essentially, this is what my blog is all about: to help people struggling with harmful beliefs. It is a terrible thing when our beliefs actually hurt us and others.

Here are some examples: 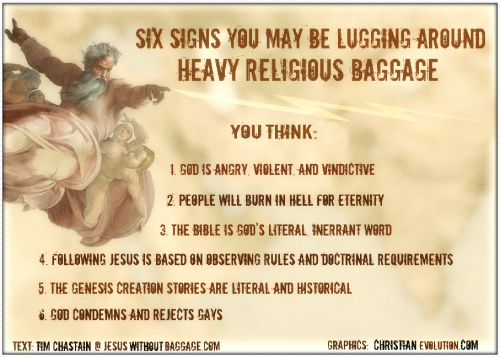 Some believers have all sorts of very harmful beliefs. But I would never deny that they are Christians. Who am I to say they are not genuine believers? Who is anybody to say? We all follow the same Jesus, and not only do we share that in common but Jesus’ only commandment is for believers to love each other as he has loved us.

So, while I will warn against harmful beliefs, I will still love all believers and not reject them as fellow followers of Jesus. Beloved, let us love one another.

47 Responses to How Important are ‘Correct Beliefs’ to God?