The Second Death, the Book of Life, and the Lake of Fire–Are They About the Endtimes or Something Else?

Posted on May 16, 2016 by jesuswithoutbaggage

Revelation 20 tells about the Book of Life. When I was young, this was one of the most frightening passages of the Bible to me:

Anyone whose name was not found written in the book of life was thrown into the lake of fire.

As I visualized the process I feared that the constant erasures would wear through the page so that there was no place left to write my name, and I would be thrown into the lake of fire. Such is the mind of a child. 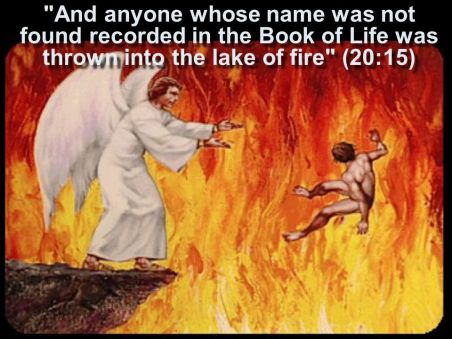 Will People be Punished in the Lake of Fire?

In response to a recent post, I was challenged by a reader who commented:

You said that you did not think that God would compel people to be in His presence against their will, but that he would not punish them. What about Revelation 20:15 says they won’t be punished???

Remember that this passage reads:

Anyone whose name was not found written in the book of life was thrown into the lake of fire.

She asks a good question; Revelation seems to say clearly that some will be thrown into the lake of fire. However, we must be aware what kind of book Revelation is; it is not a prophecy of the end-times, as many suppose, but a story of encouragement for Christians being heavily persecuted by the Roman empire and who thought, perhaps, that the church might be wiped off the earth.

Using apocalyptic literature, the writer of Revelation assures them that Rome will fail, Jesus will prevail, and the church will continue–which it did.

The apocalyptic genre the writer uses was somewhat common in Jewish literature during that time. Many such writings were written to encourage Jews and Christians during periodic times of intense persecution from about 200 BC to 100 AD.

A quite popular one was the Book of Enoch. James H. Charlesworth, scholar of ancient literature, published a book containing apocalyptic documents from the period—a thousand pages of mostly apocalyptic works that most of us have never heard of.

Apocalyptic uses boundless imagery and exaggerated action. Motifs are pulled from a wide range of familiar sources and mixed together to produce a powerful, visual scenario. And all this is done to encourage those who feel helpless and hopeless. I think Revelation is a wonderful book, but unfortunately the genre is not part of our culture so we can’t understand it unless we become familiar with it elsewhere.

So the passage she quoted is not a description of something that will happen in the future; it means something else entirely.

So what does it mean?

What Does Revelation 20 Mean?

Since we don’t have access to what specifically was happening at that time, or what kind of pressure and discouragement Christians were undergoing, we cannot determine for sure what all this symbolism and metaphor represents.

The entire chapter is worth reading. Chapter 20 comes just after the place in the narrative (chapter 19) where a white horse appears, ridden by a person called Faithful and True (Jesus). The rider and his army defeat the beast and his army. The beast and false prophet are thrown alive into a lake of burning sulfur.

So much for the powerful Romans who seem on the verge of destroying the Christians!

Chapter 20 then describes what happens to those Christians who were killed by Rome—they are resurrected! Even those already martyred live again. We are also told that these will not be subject to the second death, which is explained later.

There is a battle with Satan, who is defeated, and we learn that: ‘The devil…was thrown into the lake of burning sulfur, where the beast and the false prophet had been thrown. They will be tormented day and night for ever and ever.’ So the devil, himself, joins the Romans in the lake of burning sulfur; all three powerful persecutors of the Christians are defeated and now powerless!

But this is not all: the Book of Life is opened, and all humanity who have died are resurrected and judged. Now we discover what the second death is and what becomes of those who are judged:

The Christians were a powerless group on their way to permanent extinction, but things changed. Satan, the Romans, and all those who did not respond to the Christian message are now trapped forever in the lake of fire. Only the Christians are excluded from the punishment—they have been vindicated! Though things seem dark and hopeless, they will change drastically.

So don’t despair, says the writer, be encouraged.

Revelation is not Prophecy of the End-times

Revelation does not relate to some grand drama of the future.

In reading the article, how many references did you encounter that you have always assumed related to the end-times? But Revelation tells us nothing about the end-times; it is encouragement for Christians under intense persecution.

So read and enjoy Revelation, but do so without mistaken assumptions of end-times prophecy.

You can help me if you wish! Jesus without Baggage has grown steadily ever since it began three years ago. However, it could grow more quickly; I have a bit more than 1000 followers. If you enjoy this blog and approve of its message, there are several things you can do.

2. Share the posts you like with your friends by any method you wish. There are several sharing options below this message that make it easy to do; if you want more options, let me know and I will add them. You can also share directly from the Jesus without Baggage Facebook page.

3. Comment on the posts to respond to and add to the content, or to let us know how you feel about it. Comments make the posts more interesting for readers and also help me to know how I can better proceed in the future. I make many decisions based on comments.

If you can do any or all of these things it will make Jesus without Baggage stronger and more effective. Thank you so much for your support; you don’t know how much I appreciate it.

Blog: https://jesuswithoutbaggage.wordpress.com/ Google+
View all posts by jesuswithoutbaggage →
This entry was posted in book of Revelation, dispensationalism and tagged apocalyptic, book of life, James Charlesworth, Lake of fire, Revelation 20, the second death. Bookmark the permalink.

75 Responses to The Second Death, the Book of Life, and the Lake of Fire–Are They About the Endtimes or Something Else?