The Great Divorce by CS Lewis: A Book Review

Posted on August 18, 2015 by jesuswithoutbaggage

I read this small volume many years ago and it impacted my thinking tremendously. In years since, I have been amazed by the number of other evangelicals who have said the same thing about this book—it transformed their perspective on hell.

Though I remembered its major thrust and recalled a number of specific scenes from the book, I didn’t remember a lot of the detail; so I read it again. And it was as good this time around as it was before.

Let me say up front that this might not be a book for everyone—not because of the content but the style. Lewis was a British classical scholar, and he wrote Divorce in the 1940s around the time of WWII. So it contains literary references, as well as early 20th century British words, issues, and expressions, that may not be familiar; and it might feel old fashioned. Otherwise, I think it is very readable. 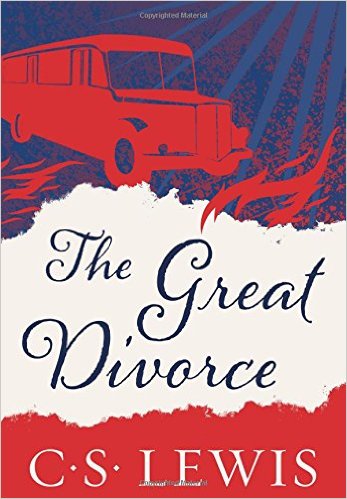 Click on the book to see it on Amazon

Divorce is written in the first person voice—apparently the voice of Lewis himself. We don’t know how long he was in the Grey Town (hell), but he seems to have recently arrived. He observes that Grey Town is a dreary place and the inhabitants are dour, quarrelsome, and cynical. There is no tormenting fire, and in fact no punishment at all; it turns out that they live here because they choose to live here.

Lewis encounters a number of inhabitants on their way to catch a bus for a visit to another place (you might call it heaven), and Lewis joins them. From this point much of the story revolves around conversations Lewis observes between the inhabitants on the bus and him, each other, and the inhabitants of the place they visit. Some conversations are a few pages long, but they are filled with excellent human insight and well worth reading; you might even see yourself in some of the discussions.

I will not describe their contents; I could never do them justice. So I will let you experience them for yourself.

Once they arrive at the new place, Lewis first notices that the people from Grey Town appear insubstantial and almost transparent in the new place. It is a place so solid that the visitors can hardly walk on the grass because it will not bend or crush but penetrates their insubstantial feet; even fallen fruit are so heavy that one can hardly pick them up.

Each visitor is met by some ‘solid’ (or ‘bright’) person from their past life who lives in the ‘solid’ world. These solid people have no difficulty walking in the solid world, as the grass bends naturally under their feet. Their purpose is to show the guests around the area and encourage them to remain there rather than taking the return bus trip to Grey Town. The conversations between the guests and their hosts are very enlightening.

By the way, keep a lookout for the red lizard.

After exploring the area and listening to couples in conversation, Lewis encounters his own host—his favorite author from his past life on earth. If you are familiar enough with CS Lewis, you might guess who this person is. From him, Lewis learns a lot about this solid world, about Grey Town, and about people. Of course, Lewis is invited to stay in the solid world—where he would become solid himself so that the grass and the environment would be comfortable. I will not share the outcome of that invitation.

Some Observations and a Few Choice Statements

The Great Divorce demonstrates tremendous imagination. It is not meant to be a speculation of what the afterlife might be like. It is a story—a fantasy to expand our minds about the issues and possibilities concerning hell and damnation. It certainly did that for me many years ago when the only concepts I had about hell were the traditional ones I learned in church, but after reading Divorce I was never the same again. Lewis did not teach anything new—he only suggested alternate ways of thinking about hell.

One of the things that captured me was the idea that if we are separated from God in the afterlife it is because we choose it—not because we are being punished. Since that time, after much study, I am convinced that this is not a mere possibility but the actual truth of the matter.

Another idea was that even after rejecting eternal life with God, one might reconsider. I still think this to be a possibility, but who can say for sure? Whatever your take away is from this book, I do believe it will stretch your mind on the issues of hell.

I don’t want to give away too much, but I do have a couple favorite quotes from the book:

[From a visitor] Oh, of course, I am wrong. Everything I say or do is wrong, according to you.

[His host] But of course! That’s what we all find when we reach this country. We’ve all been wrong! That’s the great joke.

If you choose to read The Great Divorce, I hope you enjoy it as much as I did—twice!

Blog: https://jesuswithoutbaggage.wordpress.com/ Google+
View all posts by jesuswithoutbaggage →
This entry was posted in book or movie review, C. S. Lewis, hell and tagged The Great Divorce. Bookmark the permalink.

13 Responses to The Great Divorce by CS Lewis: A Book Review