Do You Still Feel Guilt and Fear because You Fall Short of what God Demands?

Posted on June 8, 2015 by jesuswithoutbaggage

Recently I published a post titled God’s Love for Us Takes Away Our Fear, Guilt, and Self-Condemnation. Two responses represented what I am sure many people felt after reading the article—they still felt guilty and fearful. The post was not meant to fully explore the questions about guilt and fear; it was merely describing one aspect of the good news of Jesus. But I did not explain this.

In hindsight, I should have done so and then mentioned that I would discuss how God’s love takes away our fear, guilt, and self-condemnation and how we can derive comfort and relief from our guilt and fear. I have now edited the ending of the earlier post to indicate that a fuller discussion will follow.

This is that discussion on this very important issue, yet there is still more to say than can be said here, so I have included links within the text for further reading. If anyone wants to further explore some aspect or question, just let me know.

Question: Jesus himself says, if we divorce and remarry without grounds of adultery, or death of a spouse we commit adultery????? That’s me! Thirty three years of a loyal happy second marriage, and the Anabaptists and Jesus tell me I’ve been living in adultery all these years, Guilt. Why did Jesus act as though his shed blood wouldn’t cover this situation????

Reply: I think Jesus was making the point that men who keep the law “Do not commit adultery’ and yet treat their wives harmfully by divorcing them for petty reasons (leaving their wives in very dire circumstances because in those days men had all the power and money)–those men were not faithfully observing the intent of the law against adultery. Jesus was telling people to abide by the spirit of the law and not the letter of the law.

Response: Thanks, but I still feel guilty.

This situation of misery and feeling of guiltiness rips my heart our, but it is far from uncommon. Many believers are taught that God judges us on how effectively we keep a long list of ‘God’s religious rules’ for us to follow. This is the very thing that Jesus taught against!

His specific statement on divorce in Matthew 5 is one of a number of examples he gives on the contrast between keeping specific ‘laws’ and doing what’s right by internalizing the principle of the ‘laws’–to treat people right with their good in mind (loving people as we love ourselves).

But if we abide by this statement as a specific codified ‘law’, then we have simply exchanged one rigid response for another one. The fact is, to protect people from serious harm—such as in an abusive relationship—divorce might be the best option. For more on divorce see How Does Loving Others as Yourself Apply to Divorce?

Question: I want to agree, but why can’t I feel like I’m truly forgiven or like I’m not going to be ultimately punished or whatever in the end though?

Reply: I understand your feeling. Perhaps we tend to have such feelings because it has been drilled into us for so long that God is angry, vindictive, and demands harsh justice. This is certainly what I was taught. It was not until I focused on the words and actions of Jesus, who represents the Father, that I began to understand otherwise. I hope you can do the same and overcome fear and guilt.

Response: I’ve been trying to for years, JWB, but can’t get past it. Even in things like “repent” from Jesus’ own words and his mentioning hell even more than Heaven, I still can’t get past it for some reason. And perhaps I spent too long in the Southern Baptist and Roman Catholic Churches or something.

This is another thing that grieves my heart—creating fear by teaching that God is angry with us and will punish us in burning hell forever. Neither premise is true. From their limited understanding, some Old Testament writers portray God as angry and vindictive, but Jesus does not; he represents God as the Father who loves us all and desires our peace and the healing of our fear and pain (see: God is not Angry and Harsh with Us as Many of Us Thought).

Jesus does call on people to repent, but we have come to invest that term with misguided baggage. What does repent mean? It means to change course, or change our way of thinking. The context of Jesus’ message to repent was in response to the dawning of the Kingdom of God—or the establishment of God’s will on earth through a community of people devoted to the kingdom and kingdom ethics.

To repent was to change one’s priority to the Kingdom of God rather than whatever priority they had before—even religious priorities. In identifying with the kingdom one should confess their sins (acknowledge their inadequate behavior patterns) and live in light of the expanding kingdom.

The second premise—that God will punish us in burning hell is also false. The Bible does not teach such a thing. Much of the problem is that we have collected a number of passages that really do not relate to each other and infused them with a harmonizing concept that is not taught in the Bible. Even the words we translate as hell (Hades and Gehenna) don’t refer to an eternal burning hell. For a detailed examination of each passage using these words see my series collected in Resources on Hell and Conditional Immortality.

There is no need to fear either that God will not forgive us or that we will burn in hell.

There are many more questions to consider on fear and guilt, but we cannot address them all here. Most of them are created by a few harmful beliefs that are common among believers today. I discuss some of them in the posts below:

If you wish to discuss, or ask questions about, beliefs that are troublesome to you, feel free to comment in the comment section below or, if you prefer, contact me directly at the email in Contact on the menu bar at the top of they page.

Doesn’t God Require Something of Us?

You might ask: This is all fine and good, but God must have some expectations of us. What is it that he requires? What commands must we follow? Ah!…there are expectations, but here there is even more Good News! And we will talk about it next time.

In this series so far:

What is the Good News of Jesus Anyway?
God is not Angry and Harsh with Us as Many of Us Thought
God’s Love for Us Takes Away Our Fear, Guilt, and Self-Condemnation
Do You Still Feel Guilt and Fear because You Fall Short of what God Demands? (Today’s post)
We are not to Follow Burdensome Religious Rules
We are Agents for Expanding God’s Kingdom on Earth
Death is Not the End because Jesus Offers Us Eternal Life and Happiness
When the Good News of Jesus Doesn’t Sound like Good News At All 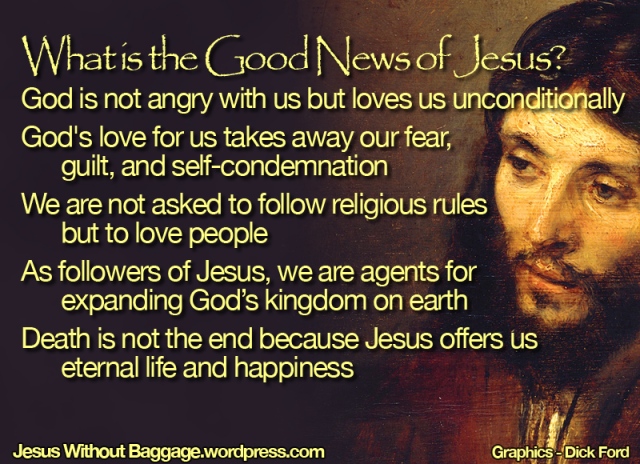 38 Responses to Do You Still Feel Guilt and Fear because You Fall Short of what God Demands?