Where the Spirit of the Lord is, there is Liberty

Posted on July 21, 2014 by jesuswithoutbaggage

During the entire year of 1976 (the bicentennial), my denomination used a special logo in its publications. Recently, I came across a book mark from that campaign while cleaning out a storage space. It depicts George Washington crossing the Delaware and includes the ‘There is Liberty’ logo and reference: II Cor. 3:17.

When I saw the old, familiar bookmark I wondered, just as I wondered 36 years ago: ‘What does George Washington and the Delaware have to do with this passage in 2 Corinthians?’

Where the Spirit of the Lord is, there is Liberty (KJV)

My answer to the question is the same as it was then: ‘Nothing that I can see.’

The denomination seems to have co-opted a biblical passage, completely out of context, to support ideas of political freedom and American patriotism. There is nothing wrong with those concepts, but they do not relate to 2 Corinthians 3. 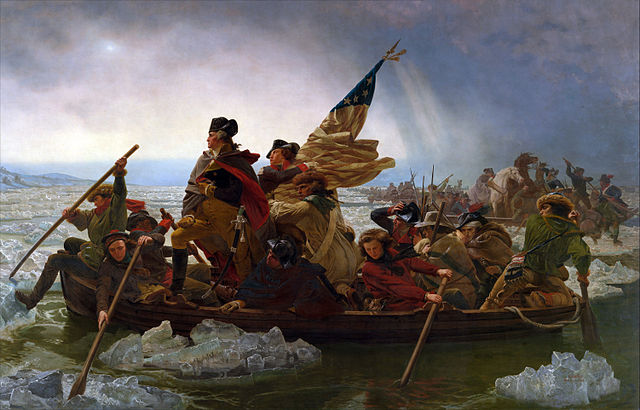 The Context of the Spirit of the Lord and Liberty

Paul’s comments on the Spirit of the Lord and liberty have nothing to do with freedom from political oppression. Instead, he is talking about freedom from the oppression of Old Testament law. He writes that we have a new and better arrangement:

He [God] has made us competent as ministers of a new covenant—not of the letter but of the Spirit; for the letter kills, but the Spirit gives life.

Now if the ministry that brought death, which was engraved in letters on stone, came with glory…will not the ministry of the Spirit be even more glorious?

Paul’s view is that legalism of the letter of the law, including the ten commandments, is destructive; but the new arrangement gives life.

This is consistent with Jesus’ teaching, in Matthew 5, that the letter of the law is inadequate and what matters is the intent of the law, which is treating others fairly and with good will. The rules on murder, adultery, and other issues are clarified to show that what is important is to consider the good of other people; and he even states that we must love our enemies.

Observing the letter of the law will not do. Paul agrees and states that the Israelites’ minds were dull, but Jesus removes the dullness:

But their minds were made dull, for to this day the same veil remains when the old covenant is read. It has not been removed, because only in Christ is it taken away. Even to this day when Moses is read, a veil covers their hearts. But whenever anyone turns to the Lord, the veil is taken away.

When we read Old Testament laws legalistically, as rules to be followed rather than principles of relating to other people, then our minds are dull just as were the minds of the Israelites at the time of Moses and of the Jews of Paul’s time. A veil prevents us from understanding Jesus’ principles of behavior—to love the Father and to love others as ourselves—and we see only rules, rules, rules.

This is a great burden because legalism is bondage, but such bondage should not be the experience of believers because ‘Where the Spirit of the Lord is, there is freedom!’ And this freedom is freedom from the bondage of legalism.

Jesus is not in the business of heaping burdens upon us. Instead, he gives us this invitation in Matthew 11:

Come to me, all you who are weary and burdened, and I will give you rest. Take my yoke upon you and learn from me, for I am gentle and humble in heart, and you will find rest for your souls. For my yoke is easy and my burden is light.

Certain believers constantly demand that other believers follow rules of behavior, but this is bondage and we must refuse the bondage those believers demand of us. Their judgment should not affect us because Jesus is our Lord and he does not burden us with rules.

As Paul realized, ‘Where the Spirit of the Lord is, there is freedom.’

What about Paul, Jesus, and George Washington?

Political freedom is certainly a good thing, but this was not Jesus’ mission. Neither was it Paul’s mission. Jesus was dedicated to changing people—not political systems, and Paul followed Jesus in that dedication.

Perhaps the most terrible words in the history of the Church were ‘In this sign [the Christian cross] conquer’. Almost three hundred years after Jesus, Emperor Constantine claimed to see these words in a vision, and it was then that the distinction between politics and the church began to blur.

We should not confuse political freedom with the freedom Jesus gives us; they are not the same. George Washington had nothing to do with the liberty Paul describes. Jesus is not interested in politics but in reconciliation and our treating people fairly on an individual basis.

Note: This blog post is my first in cooperation with the Synchoblog blogging community. Other contributors on the topic of liberty are:

22 Responses to Where the Spirit of the Lord is, there is Liberty