Posted on April 29, 2013 by jesuswithoutbaggage

Are you ever afraid of unseen forces? Do you feel that something out there is ready to do you harm? Do you ever think you might be able to persuade them to leave you alone—or perhaps even to help you?

Are these unseen forces good or evil? 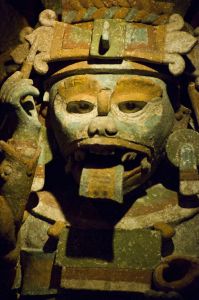 The Origins of Superstition

It seems that from the earliest times, humanity has been consumed with fear and superstition. This is not difficult to understand. Imagine our distant generations when we were hunters and gatherers and just becoming aware of ourselves.

We were also becoming aware of our environment; we noticed things around us and began to ask questions. What causes destructive weather? Why does fire burn our shelters and our people? Why do we sometimes find food and sometimes we do not? Why do we become sick and die? Today, we understand why these things happen, but in earlier days we did not.

The forces of nature often seemed random and arbitrary to our ancestors, but they thought there must be something behind them. It is understandable that they would believe that uncontrollable and random events were caused by unknown entities with intelligence and power. To them, nature was alive with unseen entities; they filled the forests, lakes, and skies.

It seemed to our ancestors that these entities could help humans or harm them, so it became important to try to guess what they wanted. Many came to believe they could appease them or gain their favor with sacrifices of food, gifts, or even the blood of humans.

In ancient times, certain unseen entities were thought to have more power than others. Sometimes a god of one clan was called upon to bring victory over another clan. The winning clan was the one with the strongest god. Gods even battled with each other, and these battles often had ramifications among humans. In Mesopotamia, it was believed that the heavens and earth were created by a victorious god with the body of the vanquished god.

Something like this is what most anthropologists believe was the origin of belief in gods and spirits. It also produced fear and superstition.

The simple belief that we are surrounded by invisible entities is not necessarily harmful, but when we try to appease them or gain their favor we begin to fear them and their power. We begin to try either to obey them or to manipulate them until they have a massive influence over our lives and behavior even though they do not exist at all.

In some ways superstition and science are similar; their roots are the same—we begin with a hypothesis and then we test it. However there is a difference in that science repeats the test until the hypothesis is deemed valid or invalid, whereas the superstitious often hold to a superstition if it seems to work once in a while. Even an occasional tenuous positive result is seen as proof of the superstition.

Constructing a world of spirits and gods to explain the unknown aspects of nature might have been a reasonable attempt by our ancestors to understand the environment, but it also created the harmful effects of superstition and fear. Perhaps we should combine the two terms and call it superstitious fear.

Superstitious fear of the gods can make us do anything, and some of the things we think the gods require are horrible. Fear of the gods also brings a sense of alienation. Very few believe they have a secure relationship with their god, and those who feel secure do so only because they think they follow all the strict requirements of their god.

8 Responses to Fear and Superstition